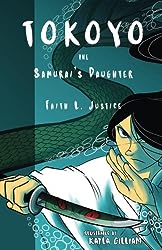 Most noble-born girls of Tokoyo’s age learn to sing, paint, and write poetry.

Not Tokoyo. She’s an adventurous girl.

The daughter of a samurai in fourteenth century Japan, Tokoyo’s father trains her in the martial arts. When he is away, she escapes to the sea where she trains with the Ama—a society of women and girls who dive in the deep waters for food and treasure. But disaster strikes her family. Can Tokoyo save her father using the lessons she learned and the skills she mastered to overcome corrupt government officials, her own doubts, and a nasty sea demon?

Thank you to the author who provided Michael and I, in our capacity as members of Rosie’s Book Review Team, with a digital copy of this book in return for an honest review. If you would like your book reviewed, you can contact Rosie Amber here: http://rosieamber.wordpress.com/

Tokoyo, The Samurai’s Daughter is set in Japan in AD 1319, the third year of Hojo Takatoki’s regency for Shogun Price Morikuni.

Tokoyo’s father is Tokoyo’s whole world. He is also Lord Oribe, the noble samurai, and Tokoyo is the samurai’s daughter. Tokoyo does not have a mother, she died giving birth to Tokoyo’s still-born brother when she was just a baby herself.

Born into a world of privilege, Tokoyo is very aware of the poorer circumstances of those in the village. One of her favourite past times is to dive with a group of female divers called the Ama, who are trained to dive for oysters at the bottom of the ocean. The book very quickly provides insight into Tokoyo’s character, which is determined and tenacious as well as kind and generous and sets the reader up for the story to come.

One morning, Tokoyo’s world is shattered. Her father is accused of cursing the most powerful man in Japan, Regent Hojo Takatoki, and is banished to the Oki Islands. His lands and fortune are forfeited. Tokoyo is barely able to say goodbye to her father and when she returns to her family home, she finds that she has been turned out without a penny. The only items she manages to salvage are some sensible clothes and a knife.

Tokoyo is convinced of her father’s innocence and sets off on a dangerous journey to join him in his banishment on the Oki Islands.

This is a story of rising above adversity and good conquering evil. The story also highlights how good deeds and kindness to others have a way of returning to the giver in a time of need.

I read this book with my son, Michael, aged eleven years old. While Michael loves to be read to, he is a reluctant reader himself. He loved this book so much that he actually read on ahead by himself which is very unusual.

Michael’s favourite part of the story was Tokoyo’s encounter with a water monster. Michael was very admiring of Tokoyo’s ability to hold her breath underwater for long periods and fighting skills.

Our rating for this book is five out of five stars and I would recommend it for readers, male and female, aged 10 years and upwards.

Christina B. Conroy rated this book four out of five stars and said:

“This is a delightful story about a brave, skilled young girl who saves her world. She is totally sympathetic. I cared about her and routed for her, throughout her quest. The historical setting is fascinating and beautiful. It is a good read for kids and adults.”