The events I shall now relate happened a few years after Illus Wheelburn made his escape from Prae Ducis, his fare funded by his production of maps of a distinctly spurious nature. People have commented, with surprise, that he produced maps of Port Naain, and they ask why? In simple terms, because  everybody knows that treasure is only found in distant foreign parts, there is no point in creating treasure maps of Partann to sell to the Partannese. After all, they know Partann. It is familiar to them.

The field you mark with a cross, they know as the field that Old Brieni runs his few cows on and has done so for fifty years. Whilst Old Brieni might not be the most intelligent of men, he’d damned soon notice a bunch of pirates burying something in his pasture, and he’d have had the loot out, valued and reinvested before they’d even returned to the sea.

Illus reasoned, entirely reasonably, that in Port Naain, the inhabitants craved maps hinting at treasure, set in exotic locations. Thus they bought maps of Partann. So there is every reason to assume that those dwelling in Partann also craved novelty. Consequently he produced for them two maps hinting at treasures hidden in Port Naain. The maps were sold. Illus sailed north, and never gave them any more thought.

But what about the maps and their purchasers? One purchaser was Bocckan Grudge. Bocckan was a pastry chef. Let us be honest here, he made good pastry, but it was not exceptional pastry. But when it came to choux pastry,  nobody in Prae Ducis could match him. Indeed it was said that on the days when he prepared profiteroles, gourmets stood in line waiting for the restaurant to open. But what glory is there in making the best profiteroles in Prae Ducis? Or even the best in Partann? To be the best you have to be the best in Port Naain. So he and his wife, Bessa, would move to Port Naain.

Now on the wall of their small parlour, (Bocckan was an employee and as part of his honorarium he had two rooms above the kitchen to live in) they had one of the maps Illus had drawn. Bessa had seen it, liked it, and greatly daring, she had purchased it. Now nothing might have come of this wild gesture on her part. They could have lived happily in Prae Ducis, never venturing beyond the town walls. They might indeed have led lives of unalloyed respectability. But Bocckan, driven to be the best, would move to Port Naain. Bessa, one eye on the map, had agreed more enthusiastically than her husband had expected.

They arrived in Port Naain and found temporary lodgings at the Clothiers’ Guild Benevolent Society hostel. Then, before Bocckan even started to look for work, Bessa convinced him to look for the treasure marked on their map.

Now to be fair, if one were to pick a pair of desperadoes to go treasure hunting, Bocckan and Bessa wouldn’t be one’s first choice. Perhaps because of his trade as a pastry cook, both Bocckan and Bessa carried more weight than they probably should. They were both quite short, and distinctly tubby.

As tributes to the quality of the pastry Bocckan produced, they were admirable. As housebreakers and treasure hunters, they lacked the essential glamour. Still they set about methodically following their map, and discovered that the alleged site of the treasure was in the courtyard of a large house set in extensive grounds. Indeed having surveyed the premises from the courtyard gate, Bessa as absolutely confident that the treasure was hidden in a well. They decided to arrive early next morning before people stirred. Then they could examine the well.

Just to put you, good reader, in the picture, the well itself was in the grounds of the rambling house owned by Lord Cartin. Whilst it was called ‘the well,’ to be honest it was more a reservoir kept full by rainwater from the roof. Yes there was a natural spring which fed it, but this had never proved reliable enough to cope with the demands of the household. So the well was largely used for bathing, and for watering horses from. So long as the bathing was done without soap the horses seemed happy.

Now into our picture steps Mistress Parlone. She is the niece of one Lord Cartin and cousin of another. Mistress Parlone had pursued a number of careers simultaneously. She assists in the management of the family’s extensive estates. She also assists in the overseeing of the family’s extensive force of men-at-arms. Now Lord Cartin had one unbreakable rule. Nobody could give orders to his men-at-arms who had not served as a man-at-arms. Given that Mistress Parlone was telling his lances what to do, she too had to serve. To be honest it was no hardship. She rode well, was well built, and had spent more time in harness than had her brother. She served in Partann in two campaigns and was generally held to have acquitted herself most credibly.

Now one thing that must be remembered, after two seasons in the field under war conditions, there is no longer time for false modesty. When given a chance to wash, everybody just stripped and washed. So now, back in Port Naain, she was still in the habit of bathing in the well first thing every morning. She would leave her clothes by the well and after drying herself she would dress and go to breakfast. Thus when Bocckan and Bessa crept into the courtyard, they couldn’t see Mistress Parlone, but her clothes were stacked tidily near the fountain.

Personally I don’t think either of our two heroes were really cut out for a career in crime. Bessa saw the clothes, fell in love with the long nightgown in green silk, snatched it up and started scurrying back to the gate. Bocckan never noticed her leave until she was half way across the courtyard and in his surprise, he asked her what she was thinking of. I suspect his voice woke Mistress Parlone out of her reverie and she sat up. Bocckan saw her, turned and fled.

Mistress Parlone saw him, and the painter has caught her expression of surprise, just before she shouted, “Guards, stop them.”

Bocckan and Bessa found themselves surrounded by a ring of guards with drawn swords. Mistress Parlone walked casually through the house to her room, dressed, and returned to investigate the matter further. The guard captain informed her that so far, with very little prompting, the guilty parties had confessed to thirty-seven offences, including the theft of a silver cruet set which had gone missing in her late grandfather’s day. She took over the questioning personally at that point and soon ascertained that she was in the presence of the maker of the finest profiteroles north, south or east of the Paraeba River!

Pondering the story she had been told, she felt that the profiterole claim was at least one she could check. She felt that if that claim was true, there was a fair chance that the rest of the story could be believed. So the two prisoners were escorted to the kitchen and there they were set to making choux pastry.

It has to be admitted that it cannot have been easy. Lord Cartin’s cook at the time, a thin and somewhat cynical woman, insisted that Bocckan remained standing on the tiled part of the floor, so if he was executed out of hand the blood would be easily mopped up. On the other hand, once in a kitchen, Bocckan’s confidence returned. A men-at-arms who tried to pinch some of the cream was struck sharply across the back of the hand with the flat of a large spatula.

Finally the profiteroles were ready. The men-at-arms tried them, reasoning that as their duties involved facing death, sword in hand, surely it was only fair that they occasionally got to face it profiterole in hand. Mistress Parlone tried one. Even Lord Cartin’s cook tried one. She clutched Bocckan to her bosom swearing that she loved him like the brother she had never had. The assorted soldiery agreed that they were profiteroles nonpareil.

Mistress Parlone sent the rest of the tray to her father for his opinion. Half an hour later, a rather bemused Bocckan was discussing property rents and starting capital with Dobson, Lord Cartin’s factotum. Within the week he was running his tea rooms from a rather nice property for which he paid what he was assured was an entirely reasonable rent. Given that the business flourished, it seems he had been informed correctly.

As for Bessa, she told Mistress Parlone the full tale of how she came to purchase the map and the hidden treasure. Mistress Parlone, fearing that if the map remained in circulation, her chance of having a quiet morning bath would disappear entirely, purchased it from Bessa, giving her in exchange a roll of the same green silk that went into the nightgown. Now Bessa wears a dress made of this material as she manages the tea room. It must be admitted that whilst she may not have the natural advantages of Mistress Parlone, the dress still suits her remarkably well.

So here I am again with another blog tour. Not one book but three. The first is another of the Port Naain Intelligencer collection. These stories are a bit like the Sherlock Holmes stories. You can read them in any order.

On the Mud. The Port Naain Intelligencer 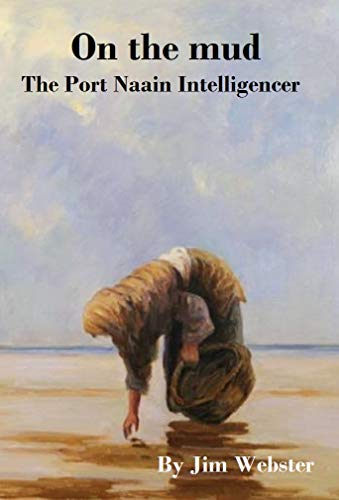 When mages and their suppliers fall out, people tend to die. This becomes a problem when somebody dies before they manage to pass on the important artefact they had stolen. Now a lot of dangerous, violent or merely amoral people are searching, and Benor has got caught up in it all. There are times when you discover that being forced to rely upon a poet for back-up isn’t as reassuring as you might hope.

Then we have a Tallis Steelyard novella.

Tallis Steelyard and the Rustic Idyll 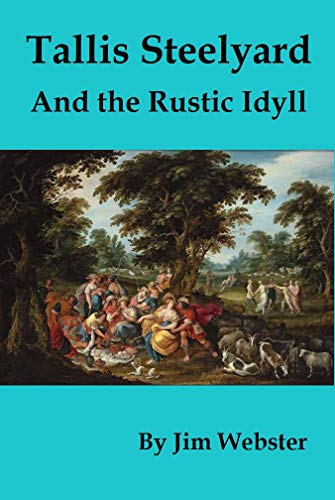 Amazon UK
When he is asked to oversee the performance of the celebrated ‘Ten Speeches’, Tallis Steelyard realises that his unique gifts as a poet have finally been recognised. He may now truly call himself the leading poet of his generation.
Then the past comes back to haunt him, and his immediate future involves too much time in the saddle, being asked to die in a blue silk dress, blackmail and the abuse of unregulated intoxicants. All this is set in delightful countryside as he is asked to be poet in residence at a lichen festival.

And finally, for the first time in print we proudly present

Maljie, the episodic memoirs of a lady. 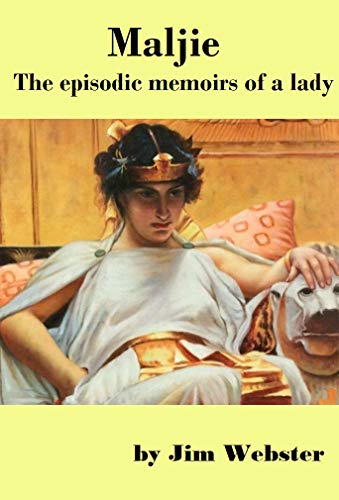 In his own well chosen words, Tallis Steelyard reveals to us the life of Maljie, a lady of his acquaintance. In no particular order we hear about her bathing with clog dancers, her time as a usurer, pirate, and the difficulties encountered when one tries to sell on a kidnapped orchestra. We enter a world of fish, pet pigs, steam launches, theological disputation, and the use of water under pressure to dispose of foul smelling birds. Oh yes, and we learn how the donkey ended up on the roof.

47 thoughts on “#Blogtour – Knowing your profiteroles by Jim Webster”