I suppose that there are many potential hobbies for young ladies to take up. As most will be taught by their governess to draw and to paint, those with any talent will often progress in this direction. As all are taught to read and write, some take to literary pursuits. As always, many really shouldn’t.

Still, the joy of listening to the smaller number of excellent writers and poets probably makes up for the pain suffered during exposure to the works of their less competent sisters.

So on pleasant days it’s not unusual to see a small coterie of girls or young women out enjoying the sun with their paints or their note pads. They spend a pleasant afternoon and sometimes create a work which gives pleasure. In all candour what more can any of us claim to achieve?

There are others who take up other hobbies. Riding, hunting and fishing all have their devotees. The latter two have the advantage of providing something for the table. Others are captivated by the sciences, gain great joy from studying the intricacies of nature. I would suggest that our better botanical artists are all women, as are any number of illustrators of bestiaries or travel guides.

So when I saw young Jessamine Hailstrong out with a folder and a butterfly net I just assumed that she was another illustrator in the making. Her mother, the wife of one of the city’s leading investors, was renowned for her embroidery. All the temples jostled for her time, and she produced beautiful work which graced the robes of a whole range of functionaries and dancers. Jessamine’s older sisters were also talented. One danced with
effortless grace, another had a beautiful voice, and both were remarkably attractive young women. Jessamine was perhaps somewhat under their shadow and if the truth was told, seems to have gone in awe of them.

On the other hand while she might not match her sisters in some areas, frankly when it came to intelligence she was more than their equal. So you can see why I wasn’t surprised when it seemed she looked set to make her mark in the natural sciences.
Still I confess that I was somewhat surprised at the places I saw her working. She seemed to find things to study and paint in old tomb yards, or in the broken ruins of ancient temples of dubious sanctity.

Several times I noted her sitting cross-legged on an old box tomb, sketching whatever it was she had caught in her net and transferred to a glass jar. I had initially assumed butterflies, after all some tomb yards, especially those which are full and have been allowed to drift into disuse over the past few centuries, are not short of plants pushing between mouldering stone slabs.

Finally on one occasion I had finished my errands for Shena, and had an hour to kill before I went to the house of a patron. So I purchased a bun for my lunch and looked around for a quiet place to eat it. It was a very pleasant day, and it struck me that if the circumstances were suitable I could not merely have my lunch but could continue to work on some verses I was preparing. Indeed it was entirely possible that if I found the right place, inspiration might come. So I drifted into the Fallan’s Ginnel Tomb Yard.

This is one of the oldest in the city and cannot have had a burial in it for a millennium. It’s only because the site is owned by four different temples that it remains unused and unloved. If they could ever agree on a role for it, it would doubtless be developed. But until that unlikely event, it remains a little oasis of peace and tranquillity.

I sat on a slab with my back to a tombstone so weathered the name of the person commemorated was long lost. I ate my bun, drank a little water from my flask and contemplated my verses. In all candour I may have dozed off. I awoke to see Jessamine Hailstrong not two tombs away, sketching busily.

As I stood up, she glanced over and wished me ‘Good afternoon,’ before getting back to her work. As I’d been included in conversation I said ‘Good afternoon’ back. As she was between me and the exit it was not unreasonable for me to walk past her and glance over her shoulder at her work. She was drawing the likeness of a most hideous imp or minor demon. She noticed my interest and gestured at the jar. “Have I captured a proper resemblance?” I looked at the jar and the creature within grimaced back at me. “You most certainly have.”

She returned to her work and I realised I had better return to mine. It was three months later where I got a message from her mother inviting me to discuss some small matter. I confess I was intrigued and so presented myself at the house at the appropriate time. Jessamine was there with her mother and on the table in front of her were numerous illustrations, some just in the original ink, others had been coloured.

As it was explained to me, a family friend had noticed that Jessamine showed a natural ability to sense certain creatures others couldn’t see. So he had provided her with a suitable net which could trap them and a jar which allowed them to be both held and seen more clearly. She had happily thrown herself into the project. Her mother, looking at the quality of the work, wondered if I could help with publication. Of course I recommended Silac Glicken of Glicken’s Printers. Jessamine’s father then approached him to discuss matters, Silac looked at the excellence of the illustrations, discussed the quality of paper and the work to be done on the plates, and a price was agreed. As well as the illustrations, Jessamine wrote a short piece on the nature and taxonomy of the imp illustrated. Later that year the book was published as, ‘The imps and minor demons of Port Naain and its environs,’ I believe it sold quite well; there was a second printing within the year.

Jessamine continued her studies and eventually travelled to distant parts to  complete her education. Apparently she wishes to become a necromancer.

And the hard sell!

So welcome back to Port Naain. This blog tour is to celebrate the genius of Tallis Steelyard, and to promote two novella length collections of his
tales.

So meet Tallis Steelyard, the jobbing poet from the city of Port Naain. This great city is situated on the fringes of the Land of the Three Seas. Tallis makes his living as a poet, living with his wife, Shena, on a barge tied to a wharf in the Paraeba estuary. Tallis scrapes a meagre living giving poetry readings, acting as a master of ceremonies, and helping his patrons run their soirees.

These are his stories, the anecdotes of somebody who knows Port Naain and its denizens like nobody else. With Tallis as a guide you’ll meet petty criminals and criminals so wealthy they’ve become respectable. You’ll meet musicians, dark mages, condottieri and street children. All human life is here, and perhaps even a little more.

More of the wit, wisdom and jumbled musings of Tallis Steelyard. Discover the damage done by the Bucolic poets, wonder at the commode of Falan Birling, and read the tales better not told. We have squid wrestling, lady writers, and occasions when it probably wasn’t Tallis’s fault. He even asks the great question, who are the innocent anyway?

And then there is;-
Tallis Steelyard. Playing the game, and other stories. 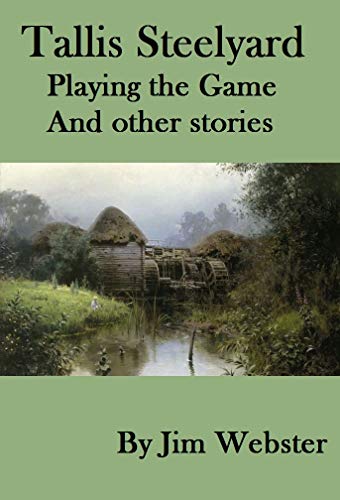 More of the wit, wisdom and jumbled musings of Tallis Steelyard. Marvel at the delicate sensitivities of an assassin, wonder at the unexpected revolt of Callin Dorg. Beware of the dangers of fine dining, and of a Lady in red. Travel with Tallis as his poetical wanderings have him meandering through the pretty villages of the north. Who but Tallis Steelyard could cheat death by changing the rules?

If you want to see more of the stories from the Land of the Three Seas, some of them featuring Tallis Steelyard, go to my Amazon page at