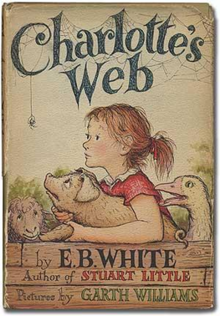 James Cudney is hosting a Children’s Readathon over at his blog This is My Truth Now. You can read the reviews for the children’s award winning books here: https://thisismytruthnow.com/2018/08/24/childrens-readathon-award-winning-books-week-2-links-to-reviews/

The choices for the young adult category of the Readathon, Charlotte’s Web and The Lion, the Witch and the Wardrobe,  are both firm favourites of mine. Unfortunately, I only had time to re-read one of these wonderful books, namely, Charlotte’s Web. but it was great to re-visit my childhood memories of this delightful book.

Charlotte’s Web by E. B. White

The opening lines of Charlotte’s Web give you a good insight into the subject matter of this wonderful book for children: “Where’s Papa going with that ax?”

Wilbur the pig is the runt of his litter and Fern’s father, a livestock farmer, intends to kill him as he is not strong. Fern sees her father setting off to the barn, ax in hand, and intervenes to save Wilbur’s life. Wilbur becomes Fern’s special pet and she rears him by hand. Quickly, the time comes when Wilbur can not longer be a house pig and he is moved to the farm of Fern’s uncle. In his new home, Wilbur finds it difficult to make friends with the other farm animals with the exception of a spider called Charlotte. Charlotte and Wilbur start talking to one another and soon a firm friendship develops between them. It soon becomes apparent the Wilbur’s lifespan will be limited at his new home and he is likely to end up as dinner. Charlotte is a most unusual and enterprising spider and she puts her mind to thinking of a plan to save Wilbur with entertaining and interesting consequences for Wilbur, Fern and her uncle.

The character of Charlotte is lovely, she is described as being clever and kind as well as calm and patient. She is able to put both Wilbur and Fern’s minds to rest over the potential killing of Wilbur. Charlotte is also resourceful enough to put her plan into action.

Charlotte’s web is a wonderful story of tenacity, hard work, friendship and the benefits of being enterprising.

Some interesting facts about Charlotte’s Web

43 thoughts on “#Children’s Readathon – Charlotte’s Web by E. B. White”