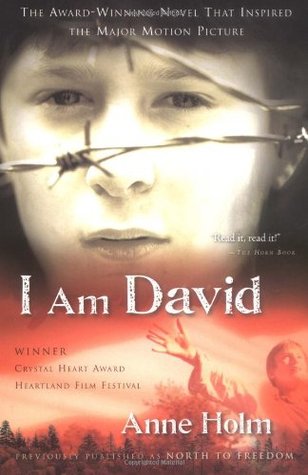 This is one of my favourite childhood books [I think I make this same statement every week – I had a lot of childhood favourites]. A story of a lonely and traumatised boy who has spent his whole life in a concentration camp. The location of the camp is not clear in the book but Wikipedia suggests that it is Bulgaria. The camp guards are called “them” by the inmates are are feared and hated. David has never know his real family. His only knowledge of any sort of family relationship is with another prisoner called Johannes. Johannes looked after David and taught him many things.

On day, the camp guard that David hates the most calls him aside and tells him that he must escape that night. The electric fence will be off for just long enough for David to climb the fence and escape into the foliage that surrounds the camp. The guard tells him he has left a bundle of food and other necessities for him in the thicket outside the fence and that he must get on a ship bound for Italy and then travel to Denmark to find his mother. David is very suspicious of the guard and thinks it may be a trick and that he will be shot but he risks it anyway and escapes. David sets off on his journey to Denmark with only the small bundle provided by the guard and his knowledge of several of European languages gained from the other prisoners in the camp.

Map of David’s journey to Denmark

I am David is a poignant story of a boy’s triumph over fear and persecution and journey of discovery as he learns how to enjoy small things in life like washing his clothes, hair and body, eating and orange and socializing with other children. During his travels across Europe David has an opportunity to save another child and spends some time with Maria’s family.

David also has a chance encounter with a Danish painter, Sophie, living in Switzerland who knew his mother when she lived in Denmark. The painter asks David if she can paint him and while he is staying with her and modelling for her painting, their conversations enable David to glean small pieces of information about his mother, who was very close to Sophie.

One of the interesting themes of the book was David’s relationship with God. He weighs up everything he has heard about the various religions and settles on the God of the green pastures as his chosen God. His relationship with God grows as he travels and he derives courage and strength from it.

One of the most beautiful passages in this book is:

Have you read I am David? What do you think of it?

Have a lovely weekend.

32 thoughts on “#Interestingliterature – I am David by Anne Holm”