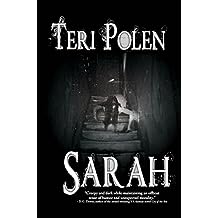 Seventeen-year-old horror fan Cain Shannon thought helping a ghost find her killers would be the supernatural adventure of a lifetime. Now, he just hopes to survive long enough to protect his family and friends from her.

A bet between friends goes horribly wrong, resulting in Sarah’s death. When she returns to seek justice against those responsible, Cain agrees to help her. But when he discovers Sarah has been hijacking his body, he realizes she wants retribution instead of justice.

Terrified of what could have happened when he wasn’t in control, Cain commands Sarah to leave his house – but exorcising her isn’t that easy. She retaliates against her murderers in bloody, horrific ways, each death making her stronger, then sets her sights on Cain. With the help of friends, Cain fights to save himself and his loved ones and searches for a way to stop Sarah before she kills again.

I listened to the audio book of Sarah by Teri Polen. I thought the reader did a good job and narrated the story at a good pace and with sufficient expression and interest factor to keep the listener engaged.

I thought this book was really creepy. It is a YA book and the characters are all older teenagers which I think worked well for this plot as teenagers, particularly males, do not see risk and are likely to react to situations with a lot more bravado than an adult would in the same circumstances. The almost underhanded and devious way the ghost of Sarah, a murdered school girl, introduces herself to Cain, a jock with a kind heart, lets you know in a subtle way right up front that this is not a particularly friendly ghost and that there is more to her than initially meets the eye.

Cain has assumed the role of man of the house after the death of his father and is protective of his Mother and much younger sister. His compassion, youth and naivety does not stand him good stead in identifying the potential threat posed by Sarah although, as he finds out more about her death, he gradually realises that she is after retribution against her killers and is not looking for help to move on from her current status.

The author’s descriptions of Sarah as she becomes more and more evil and travels further down the path of revenge are very vivid and disturbing. Sarah’s evil thoughts and deeds are reflected in her ghostly face and form.

Fortunately for Cain, he has good friends on his side in the form of Finn, an intelligent and clear minded childhood friend, and Lindsey, a lovely young lady with an aunt who deals in the occult and is able to provide talismans and assistance in fighting Sarah as she becomes more deranged and angry. The clairvoyant aunt was a bit convenient but I did not detract from the story for me.

All in this was an entertaining read and I rated it four stars on Amazon.