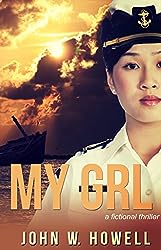 John J. Cannon, a successful San Francisco lawyer, takes a leave of absence from the firm and buys a boat he names My GRL. John is unaware his boat has been targeted by a terrorist group to be used to destroy a symbol of America’s greatness. John’s first inkling of trouble is when he wakes up in the hospital and learns he was found unconscious next to the body of the young woman who sold him the boat in the first place. John now is the only one standing between the terrorists and the success of their mission.

I don’t often read thrillers. The reason is that I can often work out the plot before the end of the book which ruins the story for me. I decided to give this book a try as I had read so much about it and I certainly wasn’t disappointed. John Howell has a great style of writing and keeps the story moving along at an interesting and fast pace. The plot was unpredictable and I most certainly did not work it out before the end.

John Cannon has embarked on a new chapter in his life. He has made the decision to give up his lucrative career as a San Francisco lawyer and opted instead for a complete break away from city life and to follow his idyllic dream of peace and quite on the beautiful island of Corpus Christi.

When John’s life starts to become a threatening nightmare, he discovers that evil can appear anywhere and before he knows it, he is fighting to understand a series of impossible happenings, which will effect his life forever. That is, if he survives!

Another recent review of My GRL

Mareth M Botha rated My GRL five stars out of five and said:

My GRL is the first of a trilogy of three John Canon stories. Once I started reading, I could not stop, and read it on and off throughout the day – barely doing anything else.
Pluses for me: I like a fast-paced plot; just enough background information about the area where John Cannon has his boat, My GRL; just long enough descriptive scenes, setting up the action along with natural dialogue, progressively getting to know the character of the protagonist as the story develops; nail biting intrigue as the reader gets to know the good and the bad guys; not excessive violence and not too much of the F… word, which was used sparingly, but with justification: because of all these plus points, I give the story five stars even though I did not always enjoy some of the sentence structures or repeated use of “He” to begin short sentences in one paragraph or repeating a character’s name too often in one paragraph.

I’m perhaps “old school”, but I find reading in the first person and in the Present Tense quite difficult. Yet, having said that, the author did a splendid job. I highly recommend this book to anyone who enjoys a real, “clean” thriller with amazing plot twists and turns, which will keep you guessing till the last page. I’m recommending this book to my husband, who is quite a picky reader, but I know he will enjoy this action-packed thriller as much as I did!