Sally Cronin is a huge supporter of Indie authors and bloggers and has a wonderful blog, Smorgasbordinvitation, which is an absolute pleasure to explore and read. Sally is also a marvellous writer and I thoroughly enjoy her non-fiction pieces, short stories, haiku’s and poems

Michael and I have recently read two of Sally’s fictional pieces and both were fantastic reads. 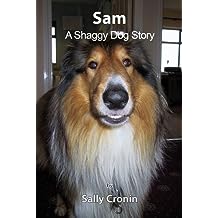 The true story of Sam, a rough collie, written from his perspective. A tribute to a true friend and a genuine family member. Millions of families around the World believe that their pet, dog or cat is the most intelligent, beautiful and loyal friend that anyone could have. And they are absolutely right. From the first moment that I met Sam, when he was just three weeks old, his personality and charm shone from his button eyes. Like many pet owners, we were convinced he understood every word we spoke and he actually could say one or two himself. Rather than tell his story from our perspective I have given him a voice and let him tell his own. I can only imagine what he really thought about his two and four-legged friends but I do hope he loved us as much as we adored him and the time he spent with us shining brightly in our lives. If only our pets could talk how much richer the world would be, and funnier.

I read Sam, A Shaggy Dog Story to my younger son, Michael, aged eleven. My older son, Gregory, enjoyed the story and started coming into Mike’s room every night to hear me read. The story is told through the eyes of Sam and explores his relationships with his two-legs, Sally and David, and also with the other animals that make up his world. My boys were very interested in Henry, an older cat that had gone feral when his owner, a farmer, died and the livestock and buildings were sold. The new owners knocked down the outbuildings and barn and Henry was left homeless. The boys became very invested in the story of Henry and his remaining an outdoors cat was a topic of hot debate. Mike thought that Henry should be allowed to come into the house and Greg thought that Henry was happy outdoors and free and that it was good that he was allowed to come and go as he pleased. The boys discussed Sam’s journey from a very young dog and enjoyed his progress through his “teenage” years and into adulthood. They enjoyed the scrapes Sam got into and seemed to really relate to him. Sam’s trying to learn how to talk “human” had them both rolling on the floor with laughter.

The boys also enjoyed reading about Sam’s journey to Spain and the intricacies of crossing borders with an animal in tow. It was fun for them to discover Spain, a country we have not visited, through the eyes of Sam.

A lovely read that appeals to all ages and enchants the reader with its touching relationships between animals and their owners.

Sally Cronin fell in love at first sight with Sam, a collie puppy. I must admit I too fell in love with Sam from the moment I saw his photograph on the cover of Sally’s book!
“Sam, A Shaggy Dog Story” is a delight from start to finish. Sam recounts meeting Sally and her husband David for the first time, finding his forever home with them, and settling into life as an “only child.” He meets Henry a feral cat, who fathers three fine kittens with his lovely partner, and Sam tells us many tales of their friendship in his own doggy style.

He enjoys long beach walks where he befriends Abby a white terrier, plays in deep snow on his second winter “like young puppies getting soaked and exhausted in the process,” and enjoys road trips with Sally in her sporty car.

Sam eventually moves to Spain, where he enjoys chasing water hoses and amusing guests with his party piece of asking for more or “mawgh.” One day, Sally is busy with work and tells Sam “You are beginning to sound like Oliver Twist and if you don’t stop pestering me I will call you Oliver in future.” Sam replies! “Oh, Ee, Va.” which becomes more emphasised as “ORH,EE,VA.” He earns a favourite food reward.

Sally’s writing style is gentle, warm and full of humour. Sam’s photographs will delight you, and his words will leave you feeling blessed that you bought Sally’s book.

What’s in a Name? 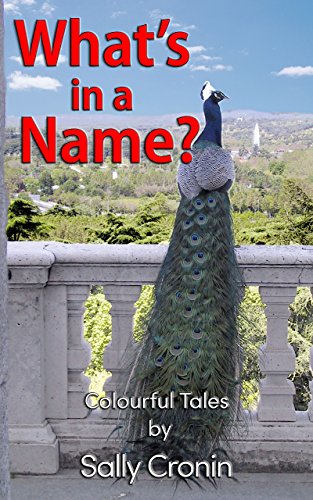 There are names that have been passed down through thousands of years which have powerful and deep-rooted meaning to their bearers. Other names have been adopted from other languages, cultures and from the big screen. They all have one thing in common. They are with us from birth until the grave and they are how we are known to everyone that we meet.

There are classical names such as Adam, David and Sarah that will grace millions of babies in the future. There are also names that parents have invented or borrowed from places or events in their lives which may last just one lifetime or may become the classic names of tomorrow.

Whatever the name there is always a story behind it. In What’s in a Name? – Volume One, twenty men and women face danger, love, loss, romance, fear, revenge and rebirth as they move through their lives.

Anne changes her name because of associations with her childhood, Brian carries the mark of ancient man, Jane discovers that her life is about to take a very different direction, and what is Isobel’s secret?

What’s in a name? is a collection of short stories, each about a different person with a name starting with a specific letter of the alphabet. This first book of two covers the letters A to J with each letter having two stories, one about a male character and one about a female character. The stories are all different and unique and Sally writes in the most beautiful and fluid manner so that you feel completely absorbed by the specific character and the life situation they are dealing with. I read some of the stories to my sons, Gregory and Michael, but others I read to myself as they were a bit adult in content for Michael, who is only eleven years old.

Two of my favourite stories in this collection are as follows:

Pour yourself a cuppa, find a comfy perch and dig into this book! The talent and versatility of author, Sally Cronin, shines in What’s in a Name. She introduces us to 20 people, who by the end of each story, will remind us of either someone we know or wish we did know. There is nothing predictable about the characters, their lives or the endings of any of the stories. To prove the point, pay particular attention to Isobel, Diana, Jack, and Hector. Want a tug at the heart strings? Then give Grace, Alexander, Francis and Anne a read. While I have only mentioned a few here, you will be equally delighted and entertained by the remaining dozen tales about found in What’s in a Name. by Sally Cronin. I look forward to the rest of the alphabet, that will comprise the next book!

I loved Sally Cronin’s book – the characters she sketches and their lives, some ordinary others rather extraordinary, left me with a great sense of satisfaction at stories well told. Invariably there was tension and suspense in the relationships in amongst the well-wrought detail of a room or a meeting or the fields. This reader has followed the author’s blogs and has always been impressed with her keen eye for detail. This was made even more apparent in this book. I highly recommend it, as a gift for one’s self or a gift for another. It will bring satisfaction of stories well told. 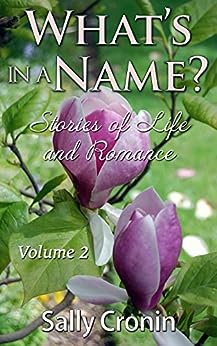 Sally Cronin’s new book and the second in the What’s in a Name? series.

Our legacy is not always about money or fame, but rather in the way that people remember our name after we have gone. In these sixteen short stories we discover the reasons why special men and women will stay in the hearts and minds of those who have met them. Romance, revenge and sacrifice all play their part in the lives of these characters.

Kenneth watches the love of his life dance on New Year’s Eve while Lily plants very special flowers every spring for her father. Martha helps out a work colleague as Norman steps back out into the world to make a difference. Owen brings light into a house and Patrick risks his life in the skies over Britain and holds back from telling a beautiful redhead that he loves her.

Meet Queenie and Rosemary who have both lost their husbands and must face a very different future. One that will take courage and the use of new technology.

Sonia is an entitled princess whose father has reached the end of his tether and Theresa has to deal with a bully in the checkout. Usher is an arrogant narcissist with a docile wife and is used to getting his own way and Vanessa worries about the future of her relationship with her teenage son.

Walter is a loner and is happy with just his dog for company, Xenia is the long awaited first baby of a young couple. Yves is a dashing romeo who has the tables turned on him unexpectedly and Zoe… Well she can see into the future.

In one way or another all these characters will be remembered by those whose lives they have touched.

You can learn more about Sally’s new book here: https://smorgasbordinvitation.wordpress.com/2017/07/28/smorgasbord-book-promotion-whats-in-a-name-volume-two-by-sally-cronin/

Since Amazon does not always transfer reviews from one country to another you can find most of the reviews on the individual books on Goodreads: https://www.goodreads.com/author/show/7979187.Sally_Cronin

You can follow Sally Cronin at the following social media links:

64 thoughts on “#bookreview A little bit of Sally Cronin”